In the new scramble for Africa, emerging economies insist their aid motives are not those of the west – but African nations should still beware 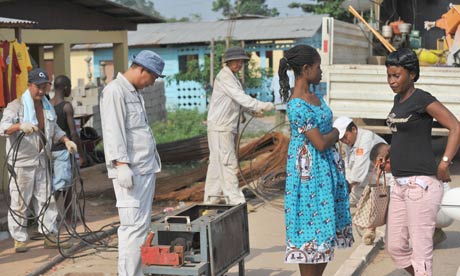 Photo: AP
Blood is tested at the AIDS Care Training and Support Initiative (ACTS) at White River Junction, South Africa. The center is partly funded by the President's Emergency Plan for AIDS Relief (PEPFAR), December 2008 photo
Medical aid organization Doctors Without Borders is concerned that proposed budget cuts to a U.S. program for HIV treatment around the world threatens the progress being made against the pandemic in Africa.

On World AIDS Day in December, U.S. President Barack Obama announced that the United States would aim to treat six million people infected with HIV around the world by the end of 2013 - two million more than the previous target.

The organization responsible for the outreach will be the President's Emergency Plan for AIDS Relief, better known by its acronym PEPFAR.

But while Mr. Obama has pledged to expand PEPFAR to include more people, his budget proposal for the fiscal year 2013 cuts more than a half-billion dollars from the program, about 13 percent of its current funding.

Doctors Without Borders, known by its French acronym MSF, has raised the alarm over the proposed cut, saying it will undermine the president's own goals.

Jennifer Cohn, the East Africa policy advisor for the MSF Access Campaign, said she is concerned that countries that receive PEPFAR support may begin scaling back their own treatment programs in anticipation of the cuts.

“In terms of the budget shortfall, I think many problematic things might occur as a result of that, including decreases in treatment, decreases in other sorts of support, and then, sort of a chilling effect on country guidelines themselves,” said Cohn.

Budget figures outlined by MSF show some major reductions in Africa, including a nearly 50 percent cut in funding for Kenya and 82 percent for Ethiopia.

In a post on the official State Department blog in February, U.S. Global AIDS Coordinator Eric Goosby wrote that the administration is “freeing up resources by reducing programs in countries with a lower HIV prevalence,” specifically mentioning Ethiopia.  He also said the program in Kenya had “matured” and that it was adjusting the country's funding to reflect a new focus on local implementation.
Proposed cuts not final
PEPFAR senior advisor Tom Walsh said all the budget figures being discussed are preliminary and that some of the country figures are certain to change.

Still, he emphasized that PEPFAR has made dramatic gains in efficiency, and that the budget requested for 2013 is the amount needed.

“Over the years, we've gotten the cost of treating an individual person per year with antiretroviral therapy down from about $1,100 in 2004 to $335 in 2011," said Walsh.. "That kind of dramatic gain in efficiency, in reaching more people with the resources available, is what Congress likes to see and we think we're going to make continued progress on that front.”

MSF is not only concerned about the budget numbers, but also with some of the program's accounting methods.

Cohn said the way PEPFAR counts the number of people receiving treatment can be misleading.

“What we're finding is actually that whereas PEPFAR is not necessarily directly supporting people on treatment in certain countries, they're actually counting those people toward the 6 million people they promise to put on treatment by 2013, so we find that concerning and somewhat disingenuous,” said Cohn.

Cohn's concerns are highlighted in a U.S. report from earlier this year on PEPFAR's programming in Malawi.

In the document, PEPFAR outlines the support it provides in the country, such as funding staff for visits to treatment sites, training service partners and developing an electronic data system. Nowhere does it say the U.S. provides antiretroviral medication (ARVs) for patients.

But, in the “Recommendations” section of the document, the authors suggest that all HIV-infected adults receiving treatment in Malawi's national program should be reported as “directly supported” by the U.S. government.

Tom Walsh for PEPFAR could not confirm that this accounting practice is common, and said the methods vary based on the arrangements in each individual country.

He said the U.S. supports a variety of services, and treating HIV is about more than just providing drugs.

“ARVs are an important part of treatment, but also important is the infrastructure to deliver the drugs, support for the clinics, training for the health providers who do the work," said Walsh. "In every country there's a different combination of resources that it takes to deliver treatment.”
Partnering against HIV/AIDS

The United States is increasing its reliance on partners in treatment programs, one of the biggest being the Global Fund to Fight AIDS, Tuberculosis and Malaria.

Walsh points out that responsibilities for HIV programs around the world are divided up between partner organizations.  So, PEPFAR may pay for training and infrastructure, while the Global Fund or the host government buys the medication.

Despite scaling back PEPFAR, President Obama's 2013 budget request includes an increase of $350 million for the Global Fund.

But that increase does not make up for PEPFAR's cuts.  If the budget is approved as is, the net decrease for AIDS funding would be about $213 million.
Posted by Guihon at 1:16 AM No comments: