Ex-Treasury official calls for Fannie, Freddie reform
Posted by Guihon at 2:28 AM No comments:

US President Barack Obama says Republican and Democratic leaders have reached an agreement on raising the US debt limit and avoiding default.
Under the proposed deal, the US debt ceiling would rise by up to $2.4tn.
In return, Congress has committed to reducing the deficit by a similar amount over 10 years, and a special bipartisan committee will be set up to agree cuts.
Congress has to approve the deal. Votes in both houses are expected on Monday.
The BBC's Jane O'Brien says the package is still likely to be a tough sell, with some Republicans and Democrats in the House of Representatives remaining opposed to different aspects.
Shares up

The US faces a Tuesday deadline to raise its $14.3tn (£8.7tn) debt limit or risk the first default in its history, a possibility that has spread mounting unease through markets.
The US president said it was not the deal he would have preferred, but noted that the compromise plan would make a "serious downpayment" on the US deficit.
Continue reading the main story

Jane O'BrienBBC News, Washington
The president says it's not the perfect deal. But he and the leaders of both parties now believe they have the framework for something they can put to their party rank and file.
It's still likely to be a tough sell. The Republican Tea Party members are unlikely to support it because the cuts don't go far enough, and many Democrats will be furious that it doesn't include tax hikes.
Both sides will hold further discussions on Monday before the agreement is drafted into legislation that can be put to a vote.
America's credit rating may still be downgraded, but it now looks more likely that the world's most powerful economy will be spared the humiliation of not being able to pay its bills on Tuesday.
"I want to announce that the leaders of both parties in both chambers have reached an agreement that will reduce the deficit and avoid default, a default that would have had a devastating effect on our economy," Mr Obama said.
Democrats and Republicans in Washington have been deadlocked over finding a way to cut spending and raise the debt limit as the Tuesday deadline approached.
The US limits by law the total amount of debt its government can run, and the Obama administration has been under mounting pressure over how it would continue to pay bills and costs like salaries if the limit was reached.
In Tokyo, shares rose 1.7% after Mr Obama's announcement, and the dollar rose briefly above 78 yen from 76.7 yen on Friday. Hong Kong shares were set to open 1.3% higher.
"We welcome the US debt deal and hopefully this will stabilise markets," Japan's Chief Cabinet Secretary Yukio Edano said.
'Not the greatest deal'

Republican House leader John Boehner said he hoped to hold Congressional votes on the plan "as soon as possible".
"This isn't the greatest deal in the world. But it shows how much we've changed the terms of the debate in this town," he said.
Mr Obama said the process of agreeing on a plan had been messy and had taken "far too long", and he called on parties to support the plan in votes in Congress.
He stressed that any solution had to be "balanced", and that cuts would not be so abrupt as to create a drag on the US economy.
The proposed deal calls for:
• At least $2.4tn deficit reduction over 10 years
• New Congressional committee to recommend a deficit-reduction proposal by November 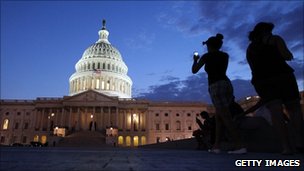 The focus now shifts back to Congress with votes expected on Monday
• A two stage increase in the debt ceiling.
Political battle

The recommendations of the bipartisan committee tasked with identifying further savings by November would also be put to a vote in Congress, Mr Obama said.
According to Mr Boehner, those savings would amount to at least $1.5tn, bringing the total spending cuts under the plan to about $2.4tn.
In recent days, Republicans, who control the House of Representatives, and Democrats, who control the Senate, have rejected plans drawn up by the rival party in an unprecedented political battle.
Related Stories

Posted by Guihon at 1:29 AM No comments: